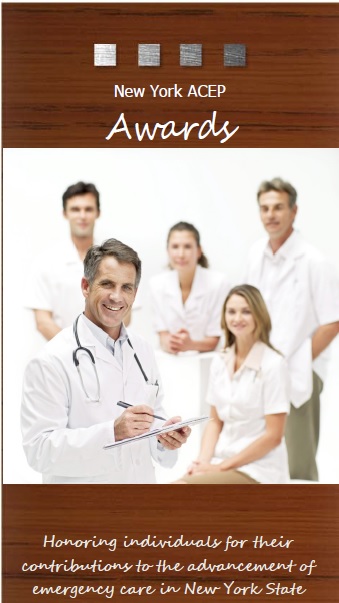 Every year New York ACEP honors individuals for their contributions to the advancement of emergency care in New York State. The plaque awards are presented at the New York ACEP annual meeting held in conjunction with the Scientific Assembly at the Sagamore Hotel on Lake George.
Due to the impact of COVID-19, nominations for the 2021 Awards have been delayed to 2022 and 2020 award recipients will be recognized in 2021.
Click here to download Awards Nomination Form.
Nomination Process Submit nomination form and supporting documents no later than January 3, 2022. Applications are reviewed and screened by the Awards Committee. Recipients selected by the Board of Directors by majority vote. Winners will be notified in late March.

Michael G. Guttenberg Outstanding Contribution to EMS Award This award is presented to an individual who has made an outstanding contribution to EMS in New York State through leadership, education, participation in system development and improvement or through exceptional performance of prehospital care duties. The individual may be a physician, nurse, EMT, paramedic, other medical provider, first responder, local official, member of the law enforcement community or citizen/consumer.
2019 Robert Delagi, MA NREMT-P
2020 Michael T. McEvoy, PhD CCRN NRP
Click here to download nomination form.